5 Ways To Complete Your Project Faster 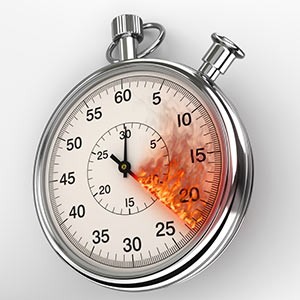 16.05.2014 - “We need to move the delivery date of your project forward,” my project sponsor said to me. “By about two months.” Two months! We were only just managing to stick to the original schedule. How was I going to cut another 8 weeks out of the plan and still deliver everything on time? I needed to look at ways to complete the project faster. Here are 5 techniques I came up with that all result in cutting time out of the schedule, one way or another. Read more »

16.05.2014 - “We need to move the delivery date of your project forward,” my project sponsor said to me. “By about two months.”
Two months! We were only just managing to stick to the original schedule. How was I going to cut another 8 weeks out of the plan and still deliver everything on time? I needed to look at ways to complete the project faster. Here are 5 techniques I came up with that all result in cutting time out of the schedule, one way or another.

Take a good look at your project schedule. What tasks could be run in parallel? You’ll probably find something. For example, we found that we could write the software training material in parallel to doing the testing. We realized that we would have to potentially do some rewrites afterwards, as things changed if we found bugs, but the bulk of the material and the stuff relating to processes would be the same. Overall, we managed to save 2 weeks by doing this.
Check the dependencies that you have on your tasks. Some of them may be there just because it looked like the most logical thing at the time. Challenge whether they really do need to happen in that order or whether there are creative solutions that you could apply to get the work done faster.

Adding more resources wasn’t an option for us, but it has worked on other projects. If you need more testing resource, for example, you could pull in some extra people to speed up the testing task. However, if the task they are working on is something that only one person at a time can do, then adding more people won’t speed things along.
There also comes a point where it isn’t effective to add more staff. You’ll spend so much time introducing them to the project and the tasks to be done that it would have been just as fast, if not faster, to let your existing team members do them. Think about how much of an induction or handover any new team members will need, and balance this with how long it will take for one of your existing team members to do the task. You’ll probably find that for some tasks you can add people without any problems and for others it would be better to stick with the team you’ve got.

What can you cut out? If you no longer have the time to deliver everything, talk to your sponsor about what elements could be left out. There are probably some features that are just nice to have that could wait until another phase (see below) or simply be dropped altogether.
Make sure that you have your key stakeholders’ and sponsor’s support if you decide that the only thing you can do is to reduce the scope. Ideally, they should be telling you what bits they want left out. Remember that this is going to require a change request and could result in significant replanning as well, so don’t forget to factor that in.

4. Lower The Quality
No project manager wants to cut corners, but lowering the quality is one way of making sure that you can get everything done. For example, we had two testing phases in the project plan. By reducing this to one, we managed to save another 3 weeks. However, we had to accept that there would be some bugs in the final software that wouldn’t have been there if we had done the further testing.
Lowering the quality is always a trade-off as it does mean that your final product won’t be of the standard that you originally hoped to deliver. Again, make sure that your sponsor is onboard with this decision before you go ahead and cut testing or reduce the quality of your deliverables in some other way.

5. Add A New Phase
Sometimes, you can bundle up extra functionality and quality improvements into a further phase. Consider your project as Phase 1 and move everything that you can’t achieve into Phase 2. This will be managed as a separate project with a separate team and budget (although given your experience on this project it will probably be you as the project manager).
You’ll need your sponsor’s approval to carve up the project this way, but it can be a really fast way to make changes that result in your project being completed early. Of course, you could argue that it isn’t really complete, because all you’ve done is go live with deliverables that aren’t 100% finished. The next project, Phase 2, will go over the deliverables adding more functionality, increasing quality or making other changes as necessary to achieve the final goals. However, if your sponsor is happy and for reasons of office politics you need to show that you are completing your project ahead of schedule, this could be one way to do it.
On my project, we trimmed back testing (accepting the risks that this brings) and ran some tasks in parallel to get things done faster. In the end, we didn’t manage to save 8 whole weeks, but we did bring the project in 6 weeks ahead of schedule. Luckily, there weren’t any significant bugs, so cutting the second testing phase didn’t have any adverse effects, and running tasks in parallel made the team more conscious about ensuring every task was completed as well as it could be, as so much else depended on it. Overall, my sponsor was happy with the time that we had saved, and I learned some valuable lessons about how to cut time out the schedule to get projects done faster!