Does the protest movement on Taksim Square have a high level of project management awareness? 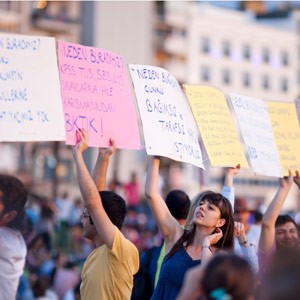 17.06.2013 - It all started because of plans to fell trees. Now the occupation of a small park in the centre of Istanbul has triggered an unprecedented wave of protest involving millions of people. The civil war-like images of Taksim Square prompted journalist Martin Droschke to talk to Roland Ottmann. Read more »

17.06.2013 - It all started because of plans to fell trees. Now the occupation of a small park in the centre of Istanbul has triggered an unprecedented wave of protest involving millions of people. The civil war-like images of Taksim Square prompted journalist Martin Droschke to talk to Roland Ottmann, project management trainer and Chairman of the IAPM Council of Experts, about Turkish Prime Minister Erdogan’s approach to the protest and the protest movement itself from a project manager’s viewpoint.


Turkish Prime Minister Erdogan currently has a project in the midst of a serious crisis. As a project management coach, is there anything relevant you can say about his approach to dealing with it?

Roland Ottmann: When you’re following the whole thing as an outsider, you only have very limited access to relevant information. Two other problems are that you have no idea how reliable information sources are and that Turkey’s social and leadership structures are very different to Germany’s. I’d have to know the Turkish Prime Minister’s thoughts and objectives to be able to interpret the situation. Ultimately, all I can do is speculate. To successfully lead a project out of crisis, you need to have all the facts on the table. You have to know the positions of the stakeholders (in this case the Turkish political leaders), the lobbyists and all the other people involved. The objectives also have to be clearly defined. This isn’t the case because the protest movement’s agenda keeps changing, the politicians keep having to alter their responses and the main issue for Prime Minister Erdogan is now probably something completely different or much more than building a shopping centre on parkland at the heart of Istanbul. Still, it’s a perfectly justified question. From a project management coach’s perspective, the events that have unfolded in Turkey precisely reflect the structures and processes of a large-scale project in crisis. We can study them to ascertain the precise time when things got out of control. My colleague, Hans Stromeyer, has put some guidelines on IAPM.net about how to get crisis projects back on track. I do actually recommend putting political interests aside and looking at the events in Turkey to try and discover what project managers can learn from them. They should view this as a worst-case crisis of extreme dimensions, abstract it and reduce it to things that could happen to them in their own job. The distance between a project manager’s workplace challenges and the political events in Istanbul and Ankara can actually help us to identify the structures that typically occur in a crisis. The fact that nobody really knows anything at this time due to a lack of reliable information is significant in a crisis situation.

The Taksim Square protest movement appears to have the typical characteristics of a crisis. The young protesters are taking action from a defensive position, split up into countless sub-groups with different philosophies on life and represented by spokespersons who, on closer inspection, don’t even belong to them. What sort of things would a project management coach have to think about if he were considering a strategy for them? Would he be able to do anything for them?

Roland Ottmann: I don’t have the relevant knowledge here either. All I know is what has been filtered through the media and what I’ve read on the internet. I believe that the protest movement is doing a lot of things right. The most important thing is that the protesters have a clear strategy and that (almost) everyone is sticking to it. I’m talking about their strategy to stage a peaceful rather than violent protest, to persevere yet remain passive, to use music and positive spirits as weapons of protest and to demonstrate humour and irony. They also seem to have established a very professional network via the social media. The protesters are obviously very aware of how important it is to manage spontaneous dynamics with strategic planning and professional project management. I think it's great! We can use our distance from the protest to analyse its structures and learn things that will help us in our work. I’m looking forward to seeing how the traditional problem that affects protests over time will affect the Turkish protest movement. The protesters on Taksim Square are a very heterogeneous bunch. They’re made up of some very different groups with very different interests and even ideologies, so power struggles are inevitable. The same thing happens in trans-national project teams when many different companies, institutions, stakeholders etc. have to pull together and cooperate.