The event was hosted by Se­ni­or Of­fi­ci­al Günter Markowitz and involved a guided tour of Graz called "Project Worlds from Past to Present“ led by the expert Gerhard Ablasser, who heads the city of Graz’s “EU Programmes and International Cooperations“ Department.

At 5 p.m. Senior Official Günter Markowitz & Gerhard Ablasser, Head of “EU Programmes and International Cooperations“, opened the meeting with a reception at Graz City Hall, where sandwiches and Styrian wines were served to participants.
The window of the function room provided an impressive view over the city’s main square.
Gerhard Ablasser talked briefly about the new City Hall, which was built according to Christoph Stadler’s blueprint between 1805 and 1807 in a neo-classical style, much to the consternation of the citizens of Graz.
He also pointed out how similar the Graz coat of arms is to that of Styria. The Graz coat of arms features a sliver panther on a green background. The panther is rearing, golden claws extended and striding to the left. But in place of the horns of the Styrian Panther, the Graz Panther wears a trifoliate golden crown. The official city seal contains the emblem of the panther with the inscription "Regional Capital Graz”.

Soon afterwards, participants set off to the Joanneum district and the museum of the same name. The Joanneum Museum is the oldest museum in Austria which is open to the public, as well as the largest universal museum in Central Europe. An escalator leads down from the square through a circular opening to the interior of the Visitor Centre, where there are ticket desks and an information point, plus access to the Neue Galerie Graz and the Natural History Museum. The entire building has a trapezoid-shaped layout due to its original position against the medieval city wall. It is an excellent example of integrating modern architecture in an historic setting.

The group then visited one of Graz city centre’s most famous architectural sights, “the Kastner“ as the locals call it. The three-year construction project led to the complete revitalisation of 30,000 square metres of historical retail space and its extension to 40,000 square metres in 2011.

Every one of the seven storeys, consisting of ceilings and special constructions, curved shapes and lighting technology, was a unique experience.

The skywalk on the Kastner & Öhler rooftop terrace, one of Graz’s most popular tourist hotspots, was also on the agenda. The roof landscape which was designed by Spanish architects Nieto and Sobejano had to be redimensioned and moved further back as a result of UNESCO world heritage requirements. The view from the roof slope towards the main square was breath-taking.

At 6.30 p.m. the group arrived at the Landhauskeller restaurant for an informal get-together after the exiting tour “from past to present“.
Gerhard Ablasser said that he would love to be involved in another network meeting and suggested a visit to the station turntable and “Smart City“.

We hope you enjoyed the network meeting in Graz and look forward to seeing you at the next one. 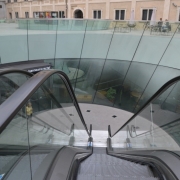 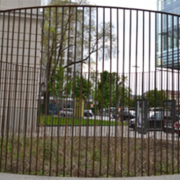 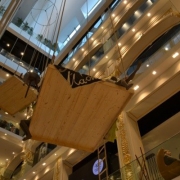 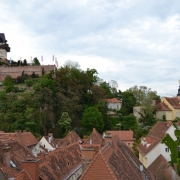 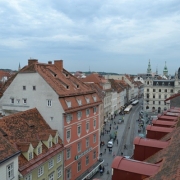 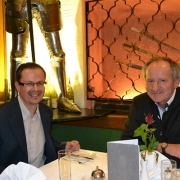 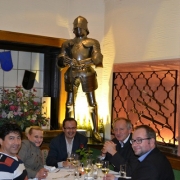