Senior Official Martin Ritz hosted the first Munich Network Meeting on 7 November 2013.
The President of the IAPM, Dr. Hans Stromeyer, wanted to give the welcome speech but he unfortunately had other project-related commitments in Houston, Texas/USA. Despite this, he still managed to speak to the participants personally in a video conference that was arranged at short notice. He gave a very interesting explanation of how the IAPM came to be founded and how it was extremely committed to providing freely accessible information about project management via modern media. He also outlined new developments, such as the introduction of Certified International Project Manager (IAPM) certification. To conclude, Dr. Stromeyer told participants about the bio-ethanol fuelled transatlantic flight completed by the two new honorary IAPM members, Grazia Zanin and Professor Max Shauck.

After this very impressive start to the evening, Martin Ritz provided a brief introduction to the topic of the Network Meeting: the importance of soft factors at the outset of any project.
An explanation of the significance of teamwork and the latest educational psychology findings on the basis of own experience provided a perfect transition to the active modules that were scheduled for the evening.
The two co-presenters, Brigitte Baumann and Irina Christl, then took over the meeting, starting off with a team building activity and a communication-intensive introductions round followed by a “chairsetting“ team exercise in three groups, each of which were given different tasks. This team exercise highlighted team dynamics processes and how they offer scope for improvement, even though the teams initially appeared to have extremely limited communication options and conflicting objectives.

In the following presentation, Martin Ritz explained how the implementation of an innovative iPACT® workshop at the outset of a project can increase team knowledge and speed up the team cohesion process. It ensures that the project team has the competence to act and a more extensive knowledge of the project at an earlier stage of the project. This increases the influence on costs - a hard factor in projects - and provides greater leverage for new ideas as a soft factor in projects. The general presentation of this flexible and innovative workshop concept was supplemented by a more detailed presentation of some of its key modules. To conclude, photos were shown to participants which illustrate the concept’s effectiveness in project management practice.
After a long day and the two active modules, snacks and refreshments were served and participants had the opportunity to network and discuss the topics covered at the Network Meeting.

Everyone continued to demonstrate outstanding team spirit and commitment at the end of the meeting, despite the late hour, by helping to tidy up the meeting room and put the furniture back in its normal place. 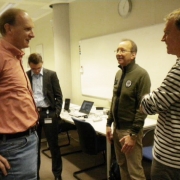 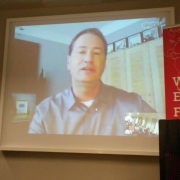 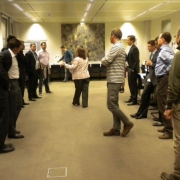 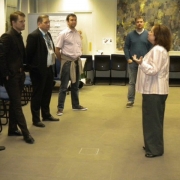 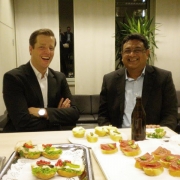 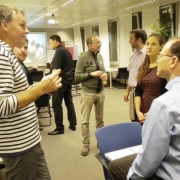 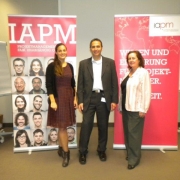 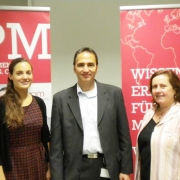