Superman is a perfect example of an agile project manager!
Happy 75th birthday*. 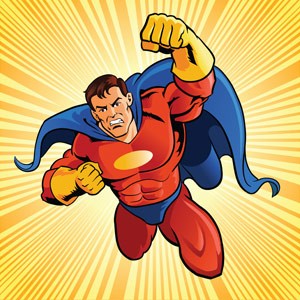 03.06.2013 - 75 years ago, the US publishing house National Publications put the first Action Comics issue in the newsagent stores. This wouldn’t have been particularly memorable if it hadn’t featured the debut adventure of the best project manager of all time. Read more »

03.06.2013 - 75 years ago, the US publishing house National Publications put the first Action Comics issue in the newsagent stores. This wouldn’t have been particularly memorable if it hadn’t featured the debut adventure of the best project manager of all time. From then to the present day, he has mastered every challenge, however complex, with breath-taking efficiency, taken every setback in his stride and been 100% resistant to stress. To mark Superman’s 75% birthday, project management trainer Hans Stromeyer shared his thoughts on whether the superhero used agile or traditional project management methods and which certification would have been the right one for him.

Are you a fan of Superman?

Hans Stromeyer: I know Superman very well. The comics were on sale when I was young and I read every single one of them. I’m part of the generation that grew up with Superman, his alter ego Clark Kent and his love for Lois Lane.


... so your ideal woman as a teenager was an unattainable beauty with majority appeal. Did Lois Lane leave her mark on the young Hans Stromeyer?

Hans Stromeyer: Who didn’t she leave her mark on?! I believe that Lois Lane is the embodiment of every man’s dream woman. And whenever we meet a dream woman, we immediately want to be Superman to impress her. The more attractive she is, the stronger our desire to be Superman - and the further away we get from being our real selves. Unfortunately, we ordinary mortals can’t transform ourselves to the extent that Clark Kent can. Kent is actually like us - men in suits - until he takes on his superhuman gestalt and wears that slightly embarrassing costume. We tend to believe that we can only impress women if we’re dressed up as our alter ego, and get them to say things like, “He’s my hero. He’s amazing and I want him! That’s typical male behaviour. But real men like you and I don’t have a red cape or X-ray vision or superpowers... which is why the more attractive and sexy a woman is, the more frightened we are of approaching her. That’s a scientifically proven fact! Beauty triggers a fear of failure.


Superman embarks on a different project of gigantic dimensions in every comic. And he masters every challenge with flying colours. Are there any parallels between Superman’s adventures and project management processes?

Hans Stromeyer: Of course there are! In comics, just like in project management, there’s always a “bad guy“ pushing us towards a bottomless pit or even Armageddon. Superman gets his superpowers from a green coloured rock called Kryptonite. But if he gets too close to Kryptonite, his powers start to weaken and it could even kill him. His enemies use it against him because it’s the only way they can be a match for him. In project management, the bad guys are “time” and “money”! Experience shows that, once unleashed, they not only jeopardise the project but can also mean that the project manager is doomed. This is particularly evident in the Stuttgart 21 and Berlin Brandenburg Airport projects! How do you control them? With the weapons of effective planning and allies! How do you learn about these weapons? Superman has the knowledge programmed into his genetic make-up as a result of being born on the mysterious planet Krypton. However, I’d advise any mere mortal to become as skilled as Superman through study, training and a certification. Now, all we have to do is learn how to use our weapons effectively. I’m human, so I can understand why many people might be envious of the comic strip hero. Many of us project managers would love to have easier jobs - but if you don’t put in the effort, you’ll never be a good project manager.


In the last Superman comic I read I got the impression that he uses agile methods because he comes up with creative solutions, even in futile situations. What do you think?

Hans Stromeyer: One of Superman’s recurring adversaries who featured in many of the stories was an evil character called Blackrock who had a mysterious black stone that gave people superhuman powers and could transform anyone into a dangerous opponent for Superman. It took Superman a lot of effort and many attempts to finally vanquish Blackrock. The strategy that helped Superman to ultimately achieve this was trying different approaches, adjusting his action strategy, responding in the right way and trying out something new again. And that’s definitely Scrum! So is Scrum the perfect method for the superhero? In some respects, yes! Because Scrum - a word that was originally taken from rugby which involves the players huddling together after a foul - doesn’t involve any lengthy planning. It means getting started on a project right away. Changes are always welcome! Customers who don’t know what they want or keep wanting more? Fine! Time problems.... suddenly aren’t a problem any more! Money? Not an issue either! Scrum turns the project world upside down and makes everything different! If you want to know how, take a look at the IAPM Agile Project Management Guide 2.0!


What would comic stories be like if they followed a traditional project management approach?

Hans Stromeyer: On the first page, Superman would receive detailed information from his adversary about what action he intends to take against the good guys and when. Attack plans, terrorist strategies, weapon lists etc. On the second page, Superman would communicate his list of counter measures to the adversary. And on page 3, both of them would sit down together to coordinate their strategies. On page 4, we’d discover that the bad guy had lied like a trooper and on page 5 he’d activate his weapons. If the bad guy also happens to be a person who never imagined that the story would take this twist, he’s just like a typical customer. That’s because the customer always changes his mind and wants more of everything. He lives in his own world and is only focused on his own interests. Experienced project managers know this. The trick is to know when the “I want more, I want it differently ... and I want to pay less money for it” time will come and to prepare for it in advance. Another approach is to analyse the person’s character, read between the lines and ask other people so that you have a precise idea of what makes the customer tick.


Which certification would be the right one for Superman?

Hans Stromeyer: That’s a funny thought - out superhero with a certificate, probably a gold-framed certificate. He could hang it on his waiting room wall. OK, seriously now: Superman would have the highest certification, Certified Senior Agile Project Manager (IAPM). But he’d probably get pretty bored in the examination because he already knows everything there is to know. I also think that Superman would only take a certification examination if he thought he was sure to win the IAPM’s Project Manager of the Year award because then he’d be able to impress Lois Lane at the presentation ceremony. It would give him a reason to ask her to accompany him! He’d probably win it too, because he’d achieve the best examination result of the year and have some first-rate reference projects behind him.


What would you like to see in the comic hero’s future life?

Hans Stromeyer: I’d like to see him keeping on reinventing himself. I’d like to see him keeping up to date and trying out new things. I’ve seen the trailer for the new Superman movie “Man of Steel” and I’m sure it’s going to be brilliant. It’s all about his journey as a baby from the planet Krypton to Earth and how he grows up here as a representative of another civilisation. The meta message is: as long as you’re willing to visit foreign planets you’ll retain your youth and never age! ... You have to identify trends and decide which ones of them to follow! And always have the courage to jump in at the deep end!


Be honest with me... when's the last time you read a Superman comic?

Hans Stromeyer: On 23.4.1978 at 9.45 a.m. in a maths lesson at Nymphenburger Secondary School in Munich. I was caught and given an hour’s detention. There was a positive outcome, though, because my superwife Marlene (not Lois), the prettiest girl at school, was also in detention. Unfortunately, I didn’t have my Superman outfit with me, so I had to make do with a few shy glances and a whispered, “How are you?”...


About Hans Stromeyer
Hans Stromeyer trained the astronauts from Germany and other nations who performed German experiments in space for 15 years. He headed several major projects during this time, including the award winning MIR97 project. In 1999 he founded Stromeyer & Partner Consulting, LLC, with branch offices in Munich and Houston, Texas, and has been the Managing Director ever since. The company specialises in project consultancy services and project manager training and coaching - both traditional and agile.


*Is Superman celebrating his 75th or 80th birthday? Opinions differ. The very first Superman comic was published in 1933 as a private publication distributed to friends of Superman’s inventors Jerry Siegel and Joe Shuster. He wasn’t introduced to the general public until five years later when the comics went on sale at newsagents.