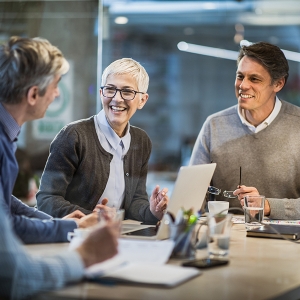 13.01.2020 - In an article on the Forbes.com blog, Steve Denning addressed the issue of innovation triggered by agile transformation. Steve Denning writes about a topic with which he is very familiar. In 2018, for example, his book entitled "The Age of Agile" was published and was named one of the best business books of the year by the Financial Times. Steve Denning also advises many international companies on a wide range of leadership, innovation and management issues. For many years he worked at the World Bank and held various management positions. In the following we summarize his article for you. Read more »

13.01.2020 - In an article on the Forbes.com blog, Steve Denning addressed the issue of innovation triggered by agile transformation. Steve Denning writes about a topic with which he is very familiar. In 2018, for example, his book entitled "The Age of Agile" was published and was named one of the best business books of the year by the Financial Times. Steve Denning also advises many international companies on a wide range of leadership, innovation and management issues. For many years he worked at the World Bank and held various management positions. In the following we summarize his article for you.

The business model of the 20th century

One method of understanding management is to analyze the important business models of our time. Another method is to look at the development of individual companies and learn from it. Steve Denning points out that bureaucracy was the dominant business model in the 20th century. Back then, the organization was always vertical and strictly hierarchical, with everyone having their own clearly defined tasks. The higher managers appointed the subordinate managers and everyone was paid according to their position. All communication took place from top to bottom. The most important values were efficiency and predictability. The purpose of this vertical structure has always been to maximize shareholder value. The dynamics were always conservative and the profits of previous years had to be maintained or topped. All this, however, made innovation very laborious, because the employees were not really involved.


The post-bureaucratic age of the 21st century

The vertical model has paved the way for the post-bureaucratic age. Thinking in the economy is now moving towards horizontal structures. These structures often develop away from the skyscrapers in large cities, such as California. The purpose of business in the post-bureaucratic age is to satisfy the customer. The monetary profit is virtually only a pleasant by-product, although of course it is very essential. In such a model, the dynamics lie more in the discovery and exploitation of opportunities than in control. Like all structures, communication is also horizontally structured. All employees should be encouraged and enabled to make full use of their talents. Denning formulates his vision of the future and his idea of the new agile business as follows: "It believes in banking, not banks. It believes in accommodation, not hotels. It believes in transportation, not cars. It believes in health, not necessarily hospitals. It believes in education, not necessarily schools." And as examples of companies that are already operating according to this new model and are booming at an unimaginable rate, Denning mentions Amazon, Apple, Facebook, Google and Microsoft. So the agile model is on the rise.


Rules of the post-bureaucratic model

If one looks at the common features of post-bureaucratic models, three "rules" emerge. The first is "customer obsession" - increasing customer orientation, so to speak. Companies are constantly focused on the needs of the end user and the customer. Proximity to the customer is incredibly important. Therefore, an enormous effort is made to find out what the customer wants and what he does with the respective product. In a way, the customers become part of the company.

The second rule is: small is good. The goal is always to divide all big things and tasks into small units, to assign them to small teams and simply to keep everything manageable. Huge problems can be divided into small morsels and then solved in small steps. The teams that work in this way usually organize themselves. Processes and procedures are much less important than inspiration and innovation. The focus is on passion and dedication, not on structures and rules.

Point three of the rules and commonalities are the networks. These companies function like networks, almost like ecosystems. "Organizational disorder" is not only tolerated, but specifically encouraged. Shared values and common culture maintain the coherence and consistency of the company.

Steve Dennings explains that every company history is unique. Each company holds this history of creation and development in high esteem because it is part of its identity. The terminology these companies use to tell their story is also unique. No one would claim to follow a business model developed by another company. Uniqueness is important. The companies attach great importance to the fact that their business model was developed by themselves. No structure has ever been imposed from outside. In addition, failures are the order of the day. One must remember that not all agile stories are success stories. And even successful companies have had to cope with many failures on their way to success. It is important to learn from your mistakes.

Dennings then lists a number of examples, including the story of how Microsoft came into being. Dennings stresses that the transformation at Microsoft took a lot of time. The company began with several teams consisting of a total of about 500 people. Then program manager Aaron Bjork started using agile methods and Scrum in 2008. A year later, several teams had already switched to Scrum. In 2010 the basic decision was made to apply agile methods in all areas. It was only a few years later that the entire company was working agile and agile methods became part of the company culture. Afterwards Dennings reports from Amazon. There, the agile approach was not born from within, as it is actually its nature, but came from the outside. This is unusual, but not impossible, as Amazon proves. As early as 1997, Amazon announced that customer satisfaction would henceforth be the driving force behind all operations within the company. Profits for shareholders would only be the result, not the goal. Amazon grew rapidly, but it was not until 2002 that Jeff Bezos, Amazon's founder and CEO, formulated his theory of working in "two-pizza teams". He found a way to communicate to all teams exactly what was expected of them. Bezos also pursued a strategy that all new hires should have a direct impact on the company's success. He only hired doers, engineers, developers and even buyers, but never managers. He wanted independent teams. In 2003, Amazon created the Marketplace to allow other salespeople to sell to customers. Amazon developed the approach with a specific "press release/FAQ" document, where for each product it was supposed to work backwards in time from the future. This means that Amazon does not start product development until the product is fictitiously finished and advertised, i.e. it has been completely thought through. Amazon imagines how the fictitious can be distributed, which marketing is used and how it is accepted. Even fictitious customer reviews are written. This approach has resulted in an astonishing number of innovations: Cloud services in 2006, the Kindle in 2007, video on demand in 2008, Amazon Studios in 2010, Echo in 2015 and Amazon groceries in 2017. And these are just a few examples. At the same time, the jewellery or shoe project never took root, nor did Amazon wallet and Webpay.


Lessons from these company histories.

What can we learn from these stories? Dennings calls this attitude, the so-called mindset. Becoming agile is primarily a matter of attitude. As a broad term he calls the holistic approach. It's not just the research and development department that needs to become agile, but the change must affect the entire company: Human Resources, Accounting... everyone has to be involved in the transformation. Partial transformations only create problems. The third important point that Dennings has learned from the various stories is that bottom-up and top-down approaches should always exist in parallel. He emphasizes that it is essential to learn from failures and draw consequences. Steve Dennings concludes his remarks by pointing out that there is no such thing as a generally perfect model. This is the essence of the agile approach. There is a perfect model for every company in detail, but it must emerge from within itself and be developed step by step. Besides, there is no patent recipe. None of the companies that make it is perfect. Some have become near-monopolists, but now have to live with the risks that a monopoly position entails. Data protection brings with it enormous challenges. Profit must be made, but it should always be a result, never the goal of a company's actions. According to Steve Dennings, the new ways of doing business, and increasingly in administration, are a new world order and a huge opportunity.