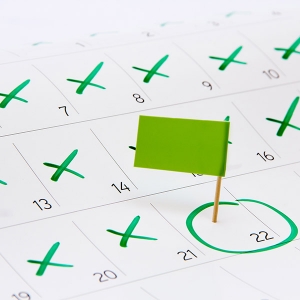 05.04.2017 - All project managers hear about milestones during their first few weeks of studying project management and they soon find that numerous meetings and discussions focus on this subject during their everyday professional lives. For many customers milestones are ultimately one of the few criteria by which they can measure the progress of a project, which enables them to avoid having to get too deeply involved in the minutiae of the project or having to keep a close track on things on a daily basis. However, milestones are not only an important way to keep the customer updated on project progress, they are also used in everyday project management to ... Read more »

05.04.2017 - All project managers hear about milestones during their first few weeks of studying project management and they soon find that numerous meetings and discussions focus on this subject during their everyday professional lives. For many customers milestones are ultimately one of the few criteria by which they can measure the progress of a project, which enables them to avoid having to get too deeply involved in the minutiae of the project or having to keep a close track on things on a daily basis.
However, milestones are not only an important way to keep the customer updated on project progress, they are also used in everyday project management to monitor timescales and to divide the project into meaningful phases.

Setting Milestones in a Meaningful Way

In project planning, milestones denote important points in time when a stage or phase of work is expected to be completed. It also marks the point at which a further phase begins or when an important decision needs to be made. Depending on the complexity of the project, additional milestones can also be specified within broader phases, which can denote when work has been completed in a specific zone or by a specific technical sub-team, for example. A milestone in a project does not constitute an actual activity and therefore does not have any time allocated to it in the planning. A milestone must always mark a specific point along a project timeline. For example, it could state something like, “complete the structural work”, which marks the point at which the final work on the basic structure should be completed. After this milestone has been reached, there should be no further discussions about the basic structure. The other technical sub-teams then begin their work and become the focus of the project manager.

The Advantages of Milestones

Milestones are a very useful way of subdividing a project into different phases. They are very helpful in providing a structure, which enables the project manager to gain an overall view of the whole project. This is particularly helpful if the project lasts several months or years. In actual fact, specifying milestones and ensuring they are achieved on schedule enables both the customer and the project manager to measure the project’s progress. In addition to the fact that milestones provide a structure, they also serve as important pivotal points in a project. They signal a point in the project when tasks must be simultaneously completed, e.g. when a decision needs to be made, an order needs to be sent, the green light must given or an authorisation must be obtained. When a phase has been successfully completed, there is often an opportunity (or sometimes also a necessity) to move the project forward in a different direction. It is not quite as obvious in the case of construction projects, however in development projects, e.g. in IT projects, achieving a milestone often means that something has been achieved that will be continued to be worked on in either one direction or another. Depending on the outcomes and the type of project, achieving a milestone can also mean that a project is terminated sooner than anticipated. The milestone facilitates a clean cut and makes it possible to terminate the project in a structured way.

Milestones can also help to deliver quality assurance because a milestone does not only enable the project to be broken down into phases, but it also provides a good point at which to evaluate and analyse the phase of the project that has just been completed. Depending on the project, it can be very useful to call a meeting when a milestone has been achieved, which will involve both looking back and looking forward together with customers, technical specialists and companies in order to recognise and evaluate what has been achieved. It also presents an opportunity to forecast the next phase of the project. This kind of meeting provides an opportunity for everyone to look proudly back on what has been achieved and it is also an opportunity to generate further motivation for the next phase. Milestones are generally motivating because, if they have been set in a realistic way, they can spur on the team to achieve future milestones according to schedule. The next milestone on the horizon is always within the reach of all project participants because it is not like the end of the project which lies far ahead in the future.

It is difficult to establish a universal rule that stipulates the number of milestones that should be set in a project. It depends heavily on the scope and the structure of the project, but also on the working methods of a given project manager. Every project manager is expected to consider his project in tangible terms and then specify a meaningful structure, which often results in milestones automatically falling into place. The project start and end are generally each marked as milestones. For example, if there are four phases in a project, the completion of the phases will constitute four further milestones. It can also sometimes be sensible to set milestones for individual technical sub-teams, for important orders with long lead times and for authorisations that need to be obtained.
It is incorrect to set a milestone for every small task because this would mean that they would lose their purpose.