Presentation of the Deutsche Zukunftspreis 2016 award and the winners 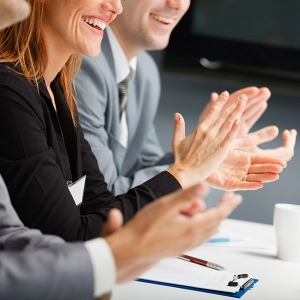 24.01.2017 - The three projects that were shortlisted for the Deutsche Zukunftspreis all have one thing in common – they are all highly complex. Ultimately, though, there could only be one winner, and the winning project is an impressive example of what can be achieved with good project management. Federal President Joachim Gauck presented the award The Deutsche Zukunftspreis 2016 award ceremony took place in November, attended by Federal President Joachim Gauck who had been invited to present the award to the winning team and congratulate the two runner-up teams for their no less innovative projects. The Deutsche Zukunftspreis 2016 once again demonstrated that Read more »

24.01.2017 - The three projects that were shortlisted for the Deutsche Zukunftspreis all have one thing in common – they are all highly complex. Ultimately, though, there could only be one winner, and the winning project is an impressive example of what can be achieved with good project management.

The Deutsche Zukunftspreis 2016 award ceremony took place in November, attended by Federal President Joachim Gauck who had been invited to present the award to the winning team and congratulate the two runner-up teams for their no less innovative projects. The Deutsche Zukunftspreis 2016 once again demonstrated that Germany continues to deliver ground-breaking research with global economic potential. The researchers have shown that with effective project management and a strong team it is possible to take a vision and transform it into reality. This Zukunftspreis research award is an important source of inspiration for many courageous researchers who aim to benefit humanity and improve our well-being through successful project management. As was the case last year, all nominated teams had been working on exceptional projects as you will see from the summaries below.

Three teams in total were shortlisted for the Deutsche Zukunftspreis 2016. The team in third place was Team 3, Dr. rer. nat. Carsten Setzer (team spokesperson) and Dipl.-Ing. Christian Amann, the project manager. OSRAM GmbH and the BMW Group, both based in Munich, joined forces in this project to develop a light source for the world's first laser headlights that are now installed in many BMW models, contributing to improving road traffic safety. Team 2, in second place, was represented by Dr.-Ing. Patrick Izquierdo as team spokesperson and Dipl.-Ing. Manuel Michel and Dipl.-Ing. (FH) Bernd Zapf as the managers of a design and development project for Daimler AG in Ulm. Bernd Zapf also represented the Gebrüder Heller Maschinenfabrik GmbH in Nürtingen. Together they realised "The vision of frictionless drive systems" with a coating technology that halves energy losses. Team 1 won the Deutsche Zukunftspreis 2016 with its carbon concrete project.

Team 1 was represented by Prof. Dr.-Ing. Manfred Curbach as spokesperson and Prof. Dr.-Ing. habil. Dipl.-Wirt. Ing. Chokri Cherif and Prof. Dr.-Ing. habil. Peter Offermann as representatives and collaborators of the Dresden University of Technology. It’s thanks to the excellent management of this project that carbon concrete could be extensively analysed and mapped. The project team was able to highlight specific aspects of this material’s economical use and sustainability. What’s more, the two project managers and their teams didn’t just analyse the advantages of this new composite material, they actually developed it. In their "C3 - Carbon Concrete Composite" project, they collaborated with 140 participating institutes to research applications for carbon concrete. This spectacular feat of project management in a project with contributions from all over Germany is more than just an outstanding achievement in research and thoroughly deserves to win the Deutsche Zukunftspreis 2016. The management of the project also contributed to it being a major success, which is evident by the impressive project deliverable despite the project’s complexity.

The winners have helped Germany to extend its innovative lead.

Now the project management benchmark has been raised again. Research teams around the globe would benefit from taking a leaf out of these project managers’ book because they have provided major inspiration for follow-up projects. Their research provides a solid basis for shoring up and extending Germany’s leading role in developing future industrial applications for carbon concrete. In the past reinforced concrete has been the most frequently used material. But this could all change thanks to the less expensive material of carbon concrete. Carbon concrete is made of flexible carbon fibres that are highly corrosion-resistant, so it extends the useful life of structures far beyond that of those made of traditional steel-reinforced concrete. Both project managers made this very clear through their research and are the deserving recipients of the Deutsche Zukunftspreis which was presented by Federal President Joachim Gauck. Their project is a refreshing example of new approaches and innovative possibilities that will hopefully encourage future project managers, as the IAPM does, to focus on independence and originality so that they can achieve similar success.

The successful management of a project isn’t something you can learn in text books. The successful project manager draws on experience, has the courage to take new approaches and the commitment and mental agility to respond effectively to sudden changes rather than focusing on conventional project management strategies. You can’t manage a project by the book and expect it to be successful. You have to believe in your vision and be willing to overcome the odd setback on the way to realising it. The carbon concrete project management team clearly demonstrated that it is possible to manage even a complex project in this way. Let’s hope the Zukunftspreis 2017 goes to a team with an equally high standard of project management.